This is part of the Interesting Problems series.

I had an interesting problem presented to me the other day that I found fascinating to work through and allowed me to use my graphics gem. The problem was easy enough to describe:

How would you make this?:

To which my answer was “fascinating! I haven’t the foggiest idea. Let’s figure out!”. I don’t do visual stuff very much but I knew that this was a good opportunity to use my graphics gem.

Normally, my graphics gem is meant for doing visualizations of simulations, or other mathy things, or even games… but art? I hadn’t really thought about that, but why not?

But I hadn’t touched my graphics gem in a while so I was put on the spot to quickly get up to speed. The graphics gem provides a couple different options for a canvas, one is called Graphics::Drawing which is just a single canvas that is never cleared. This seemed ideal. The first thing I needed to do was to get up and running with anything, so I poked at one of the examples and extracted this: 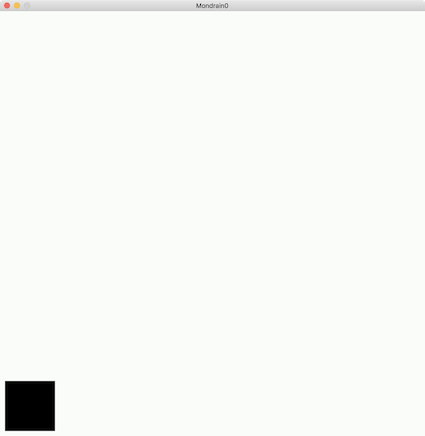 OK. So now I remember how to start a simulation, size a blank white canvas to 850x850, and draw a rectangle at 10,10 (quadrant 1 maths. The origin is in the bottom left) with dimensions of 100x100. Not a bad start. From there it is easy to draw some lines that span the whole width or height: 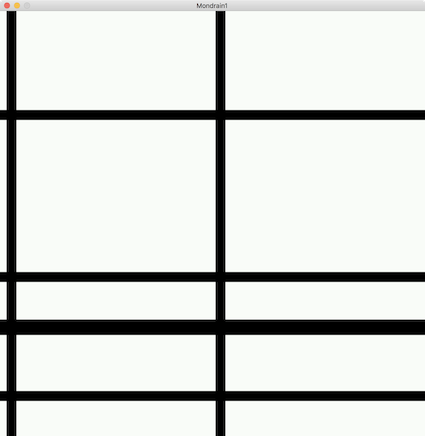 Not bad! This still has some problems. Purely random numbers can be duplicate or overlap. It can be unaesthetic. Adding and switching to the following will help clean those problems up:

This makes things more “griddy”, but I think that’s fine for now.

From there, I’d like to get colored regions. That’s not too hard: 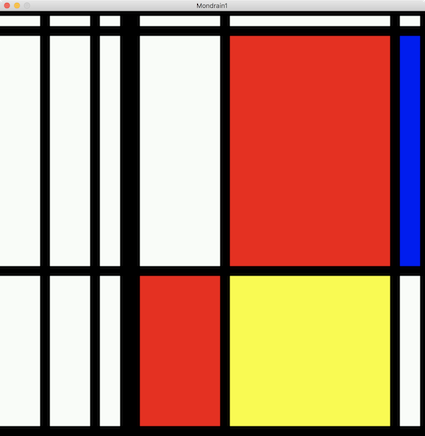 That’s damn similar to the original! I’m pretty happy with it at this point, but I do want to take it further. I want to animate it and I want to add partial-length colored lines akin to some of Mondrian’s other pieces.

So, switch from Graphics::Drawing to Graphics::Simulation (which has an update + draw architecture similar to Gosu or Processing), and move the actual drawing to a draw method and add an update method like the following:

There’s some other little things that still need doing, but really, at this point it really doesn’t take much at all to wind up with an animated version: