This is part of the Productivity Pr0n series.

My emacs workflow is a lot harder to write about because after 20+ years, it is a lot more ingrained than omnifocus that I’m not even aware of a lot of what I do. I used to do everything in emacs including mail and much of my web (before the days of everything being flash or ajax). IMAP, flash, and javascript have put the latter two on hold.

That said, I still spend much of my time in emacs. I use it to:

To help with this I’ve written some libraries and adopted many more.

I have couple of libraries available on my page on emacswiki. I’ll be specifically talking about autotest.el and toggle.el in following posts. 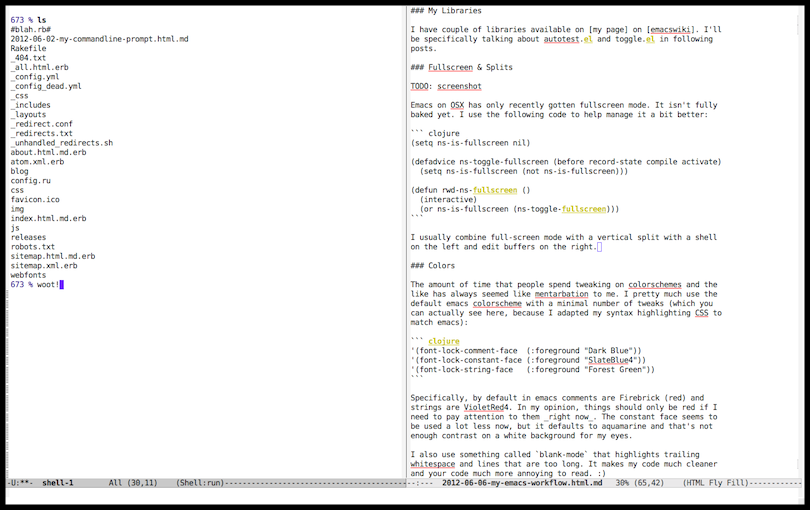 Emacs on OSX has only recently gotten fullscreen mode. It isn’t fully baked yet. I use the following code to help manage it a bit better:

I usually combine full-screen mode with a vertical split with a shell on the left and edit buffers on the right. I use functions to position emacs for particular purposes like the following:

With the following supporting functions:

The amount of time that people spend tweaking on colorschemes and the like has always seemed like mentarbation to me. I pretty much use the default emacs colorscheme with a minimal number of tweaks (which you can actually see here, because I adapted my syntax highlighting CSS to match emacs):

Specifically, by default in emacs comments are Firebrick (red) and strings are VioletRed4. In my opinion, things should only be red if I need to pay attention to them right now. The constant face seems to be used a lot less now, but it defaults to aquamarine and that’s not enough contrast on a white background for my eyes.

I also use something called blank-mode that highlights trailing whitespace and lines that are too long. It makes my code much cleaner and your code much more annoying to read. :)

with the following faces:

I use a combination of emacs’ built-in vc modes, p4.el, and magit.el because I still find 80+% of git to be bewilderingly unusable. I would use vc-p4.el but I can’t for the life of me get it to work and the original author has abandoned it.

Particularly, I find VC’s C-x v = to quickly display diffs, C-x v g to run an annotated blame with heatmap, and C-x v v (vc-next-action) to do whatever is next to do (lock/unlock/commit/merge) as simply brilliant. Between those three commands, you can do 80% of what you need to do throughout the day.

I use erc to do all IRC stuffs. Being able to hit C-c C-SPC to flip across unread IRC buffers and back to the buffer I was working in makes it a joy to use. I have almost no tweaks for this because their module system is so powerful and complete. The only thing I’ve added are some commands to talk to dircproxy so I can get backlog when I log in after an extended absence.

I don’t know how many times I’ve said this… but if you’re not using exuberant ctags, you suck as a developer. Period. I have a ruby script called “rtag” that is pretty much just a slightly-more-complex version of this:

After that, M-. will quickly whisk you off to the definition of whatever function you have under point and M-* pops you back one level.

If you work in emacs or vim… you simply need this. If you work in something else and it doesn’t support tags, you should seriously reconsider your text editor. And no, you adorable textmate users, nothing you have even comes close.

I use M-x ssh and tramp to go to remote machines and edit remote files. I don’t do it as often as I do local files, but it is nice to have. Oh, and they’re integrated, so if you ssh to a box inside emacs and then try to edit a file on that side, tramp will automatically kick in and pull down the file. It makes it a lot easier than trying to remember the stupid path syntax.

That’s all I can think of… did I miss anything?