Omnifocus on iPhone and iPad

This is part of the Productivity Pr0n series.

With the exception of my Weekly Review, I mostly use the iphone and ipad versions of omnifocus for facilitating my [Dumping Ground]. I will often be out and about or talking to a friend and an idea will pop into my head. I’ll grab my phone, fire up omnifocus, hit the quick entry button, enter the idea, save, and go back to my conversation. For this, both the iphone and ipad versions are great. 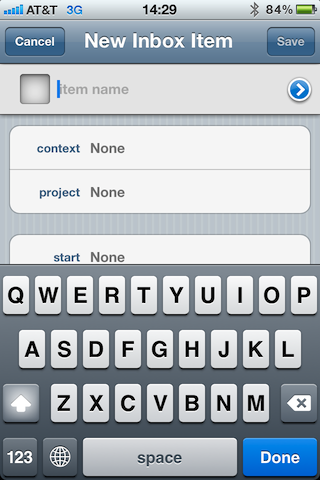 The iphone has an additional feature in that I probably don’t use as much as I should. Contexts can have map locations attached to them and omnifocus can give you an alert to do a task when you’re near that location. Location sensitivity can be set to different levels so omnifocus will only tell you to buy butter when you enter your grocery store instead of every time you’re within 3 blocks. 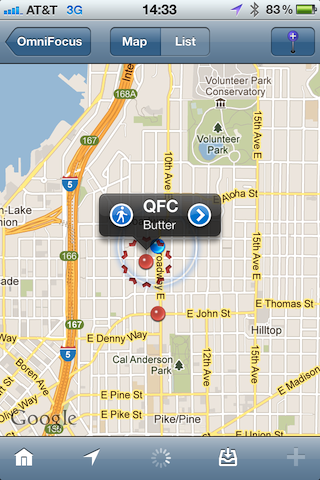 Both iphone and ipad versions have something that the desktop mode doesn’t called the “forecast”. The forecast is a cleaner temporal view of the current week that shows both the tasks you have assigned for a given day as well as all calendar items you have occurring on that day. Having the calendar makes it easy to see how much unscheduled time you’ll have to work on the assigned tasks. Being able to see the whole week makes it nice to see how well you’ve balanced your schedule for the week: 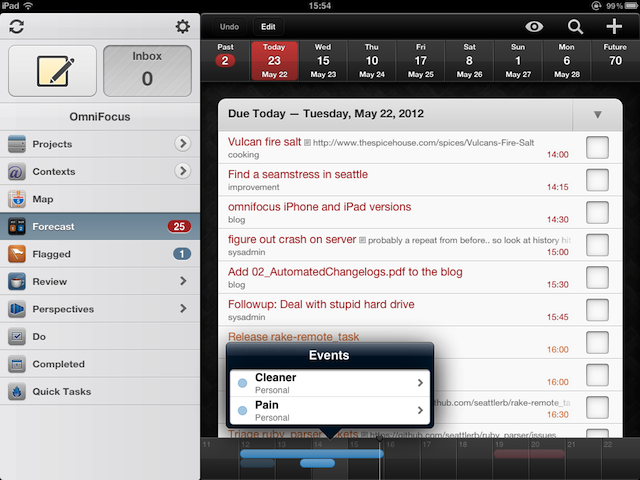 Unfortunately, without the ability to bulk change tasks (like, shifting multiple items 2 days later), this view is a bit cumbersome if you have a lot of changes you want to make. I will often look at the ipad version, but change on the desktop because I can select multiple tasks, bring up the inspector, and set their start/due dates all at once.