Standing on the Shoulders of Giants – 2015 MountainWest Ruby Conference

Standing on the Shoulders of Giants – Slides 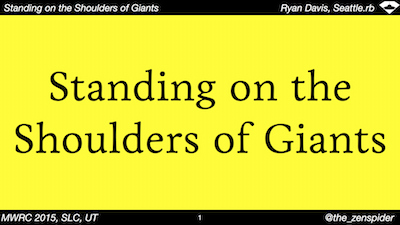 Standing on the Shoulders of Giants – Video

Ruby is a fantastic language, but it could be better. While is has done a terrific job of taking ideas from languages like smalltalk, lisp, and (to an extent) perl, it hasn’t done nearly enough of it.

Big thinkers have paved the way for us in so many programming languages, like Alan Kay & Dan Ingalls (smalltalk), David Ungar (self), Guy Steele & Gerald Sussman (scheme), and Matthias Felleisen (racket). You might not know their names, but you’ve certainly used their technology. We should plunder the treasures that they’ve thought up.

I will survey a vast minority of these ideas and how they could help ruby. Ideas including: self-bootstrapping implementations and extensive collection / magnitude hierarchies from smalltalk, instance-based inheritance and JIT compilation from self, TCO and the overarching importance of lambdas from racket/scheme, and finally object level pattern matching and the combined object/lambda architecture from the View Points Research Institute.

Ruby is at its best when borrowing great ideas from other languages, but lately it has fallen behind in this. It’s time for ruby to step up and do more with these ideas, to keep pushing forward, to stand upon the shoulders of giants.