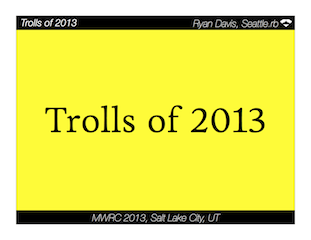 It’s that time again! No… the trolls will never truly go away. But we can mitigate their damage by identifying their bad behavior and come up with collective strategies for dealing with them. While working on this talk (and a couple followup talks) I studied and even met with a few of the top psychology researchers to understand this phenomenon….

Aaaaaaand all of this was a lie. Basically, I was being trolled by one of the trolls I called out last year and decided to troll him back.

Instead, my real talk was titled “Let’s Write an Interpreter!” and that’s what I did. In 30 minutes and 160 (!!) slides I implemented a subset of ruby that supported enough features to be turing complete all implemented in a test-driven patterns-based design that is easy to understand and maintain.

The code is available at https://github.com/zenspider/uby_interpreter.